72 first year law students competed against each other in the two-day tournament, mastering their appellate advocacy skills. Following the quarterfinals and semifinals, four finalists squared off before three judges on Jan. 17. Professors Lise Beske, Thomas Bondy, and Paul Figley, who served on the judge panel, assessed the competitors’ oral arguments in the final round.

Alan Higgins won the appellant and Kathryn Penry was the winner for the appellee. Priyanka Cohen and Dorea Batte, who succeeded to the final round, took the second place for appellant and appellee, respectfully. Congratulations to everyone for their hard work and enthusiastic participation! 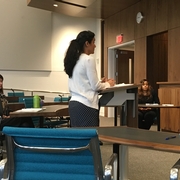 Priyanka Cohen appeals to the judges 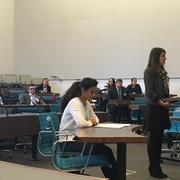 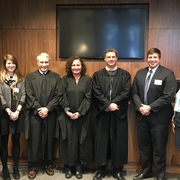 Student teams with the judges, all AUWCL professors 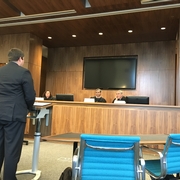 Alan Higgins presents before the panel of judges